Alumni in the Movies

by Robert Danos on May 15

From a Southern Living article we thought you’d enjoy!

Bill Paxton was a camper in his teens on the old “work program” - a way of paying off the eight weeks of tuition.

He came back to visit camp in 1991 before the filming of Indian Summer, a movie about going back to visit your old summer camp! It was very cool for the boys!

You’ll see the Mondamin shout out in bold below…

What Bill Paxton Loves Most About the South

(This is the Southern Living link to the article).

We sat down with the Texas-born actor and director to talk about filmmaking, taking trips with family, and growing up in the South.

What’s on his plate: The June 6 Release of the Sci-Fi Thriller Edge of Tomorrow

Favorite side dish: “I like fried green tomatoes and fried okra—anything fried is always good.”

I remember a great trip I took with my older brother, Bob, and my dad to The Alamo when I was growing up in Texas. We stayed at the Menger Hotel across the street and went to some cool movie palace where the whole ceiling was [covered in] fake stars. I remember seeing the movie Hatari! with John Wayne. We got to stay up late, and my dad made these things called Russian Dogs—you take pineapple juice, vanilla ice cream, and ice, and you put it in a blender to make a smoothie.

I have a lot of Southern influences. I like everything from Southern rock bands, like The Allman Brothers and ZZ Top, to Southern writers like Tennessee Williams and Thomas Wolfe.

When I was a teenager, I worked in the Carolinas on the scullery crew at a camp called Camp Mondamin. It was near East Flat Rock, and every summer the town did a production of Look Homeward, Angel by Thomas Wolfe at the Flat Rock Playhouse. That’s when I first started thinking about acting and filmmaking. I love that kind of storytelling.

I’m very proud of my Southern ancestry. My great-great-grandfather was General Elisha Franklin Paxton, from Rockbridge County, Virginia. He led Stonewall Jackson’s brigade and died at the Battle of Chancellorsville.

As a kid, I loved hunting golf balls. My parents built their dream home along Shady Oaks Country Club in Fort Worth when I was about 8. I’d set up these lemonade stands with all the golf balls I found and sell them back to the golfers. That was my hobby and a way to make extra money.

Of all my characters, my son James says I’m most like Bill Henrickson from Big Love. I think that’s pretty accurate. Because even though he was kind of a crazy, polygamous character, he was a regular guy: He fixed the car; he wasn’t being waited on hand and foot. He had to manage a lot of things. He had to crack down on the kids sometimes.

Filming Edge of Tomorrow was very physically demanding. It’s about an alien invasion in the future, and we used all the latest military technology—like a 75-pound exosuit that was grueling to wear. Tom Cruise was gung ho, but I’m like, “Can I sit in a chair with a drink in my hand and do the dialogue?”

I like to sketch little homemade postcards. If I’m visiting a place, I’ll do a drawing of it—just pen and ink with a little bit of wash, kind of monochromatic—and send them in the mail to friends.

The music, the people, the hospitality—I had the best month in Atlanta shooting Term Life (out in 2015). And eating so many great Southern dishes. I love South City Kitchen. They have a kind of crab cake hash on fingerling potatoes, with a fried egg and hollandaise sauce, that is to die for.

One Southern tradition I like is dinner at five o’clock. My children are teenagers now. Just getting them all to sit at the same table for a meal is significant.

[Several years ago], I got to take my dad to the Kentucky Derby. That was the last trip we were able to take together before he passed on. We had a great day smoking cigars and drinking mint juleps. We watched some races and all the ladies in their finest millinery.

Robert Danos, Mondamin’s year-round Program Director, is a Tulane graduate and Louisiana native who first came to North Carolina as a camper in 1979, and has been on staff for over 25 years. Before joining the year-round staff, Robert spent time both in teaching and child psychology. As Program Director, Robert is responsible for the smooth integration of the various activities at camp, ensuring that both 9 year old new campers and 16 year old veterans feel challenged and productive. He shares the responsibility for staff supervision and morale, and helps set the tone for camp in general.

Robert’s wife, Susan, spent eight years on staff at our sister camp, Green Cove, and they have two girls and a boy. 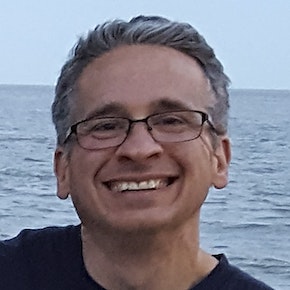