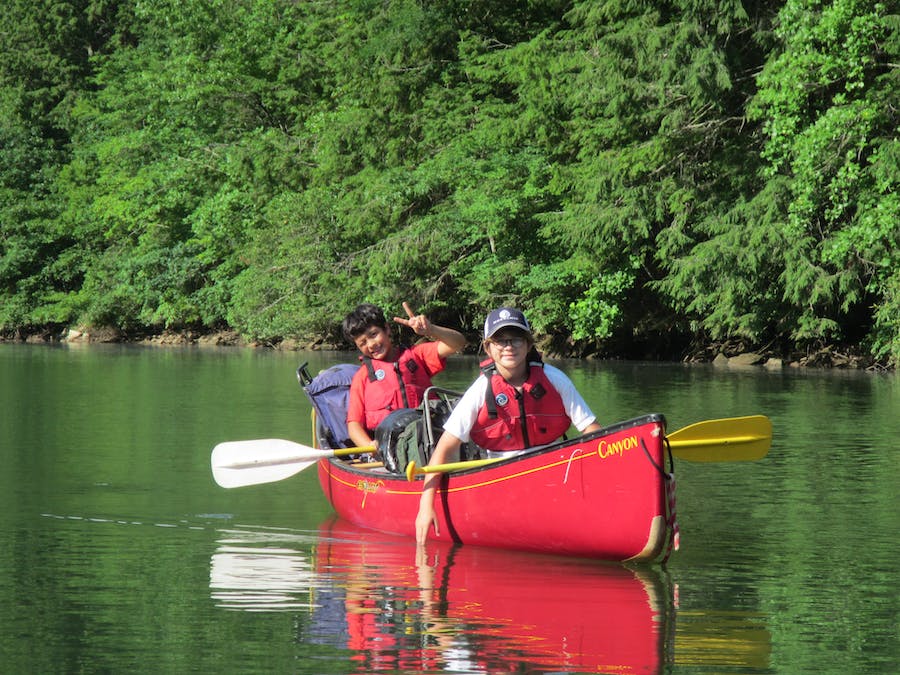 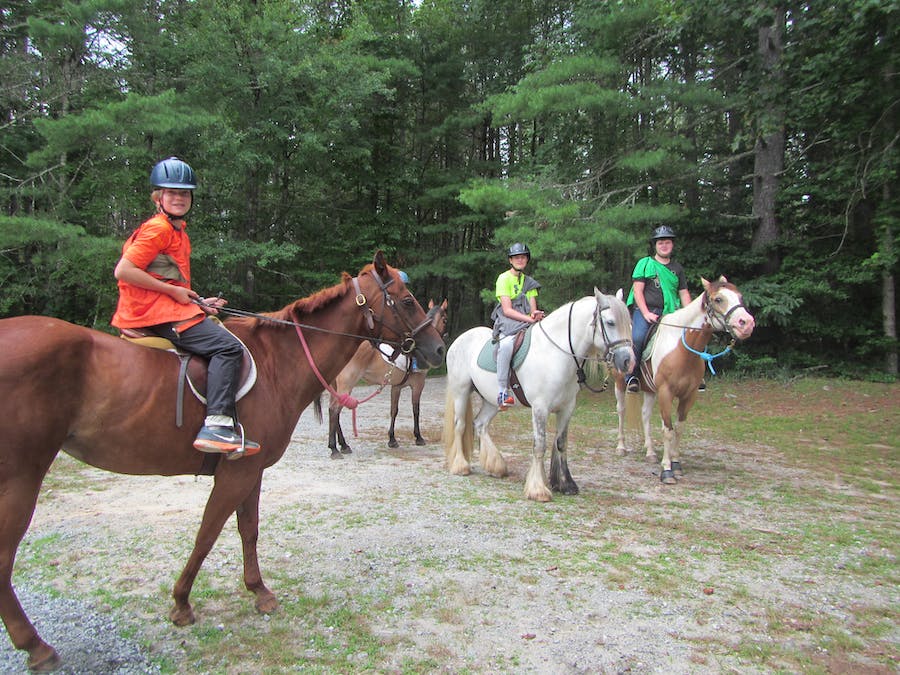 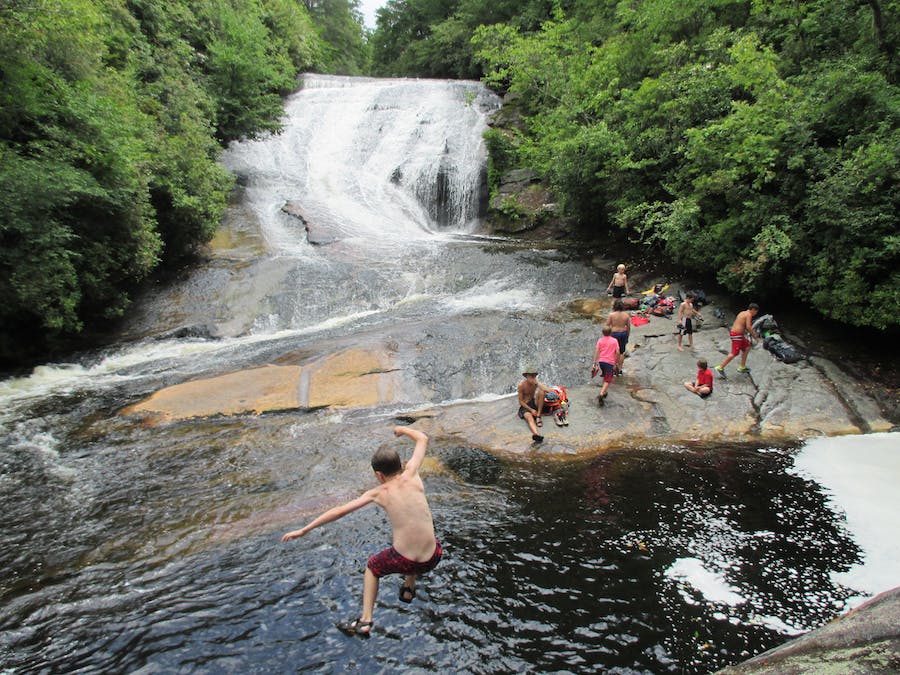 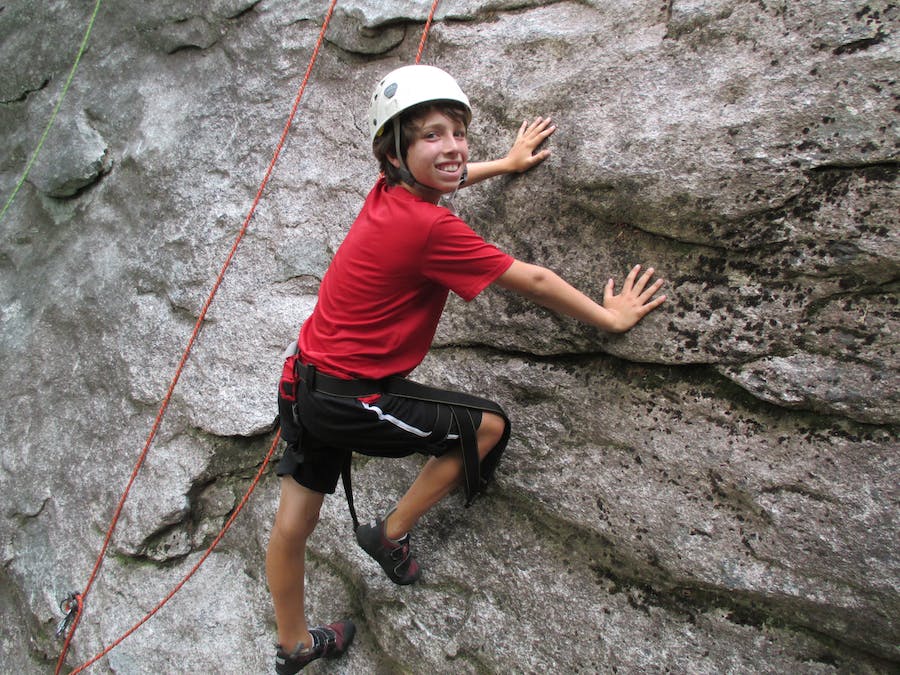 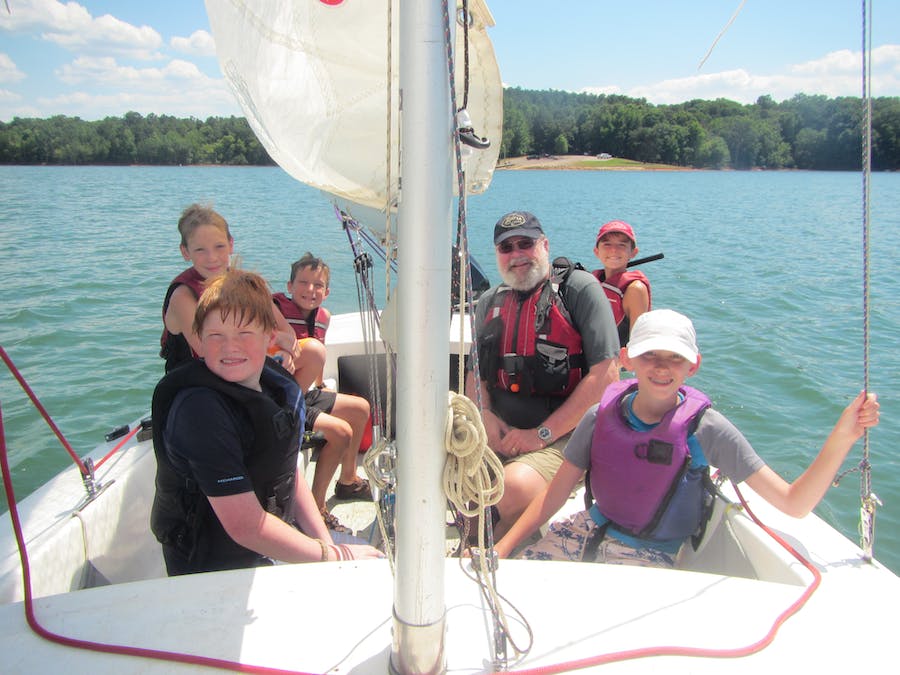 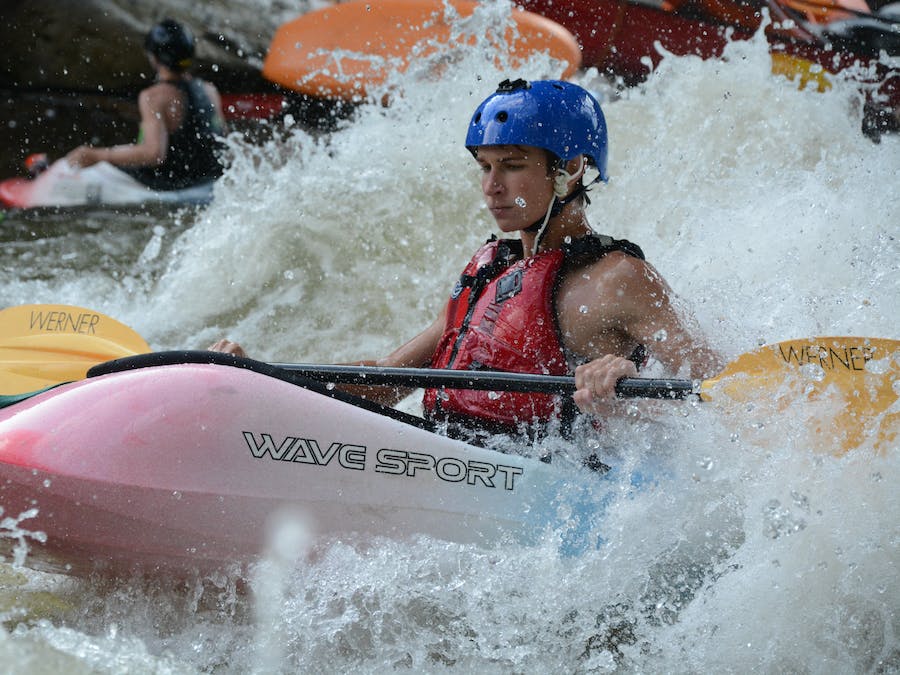 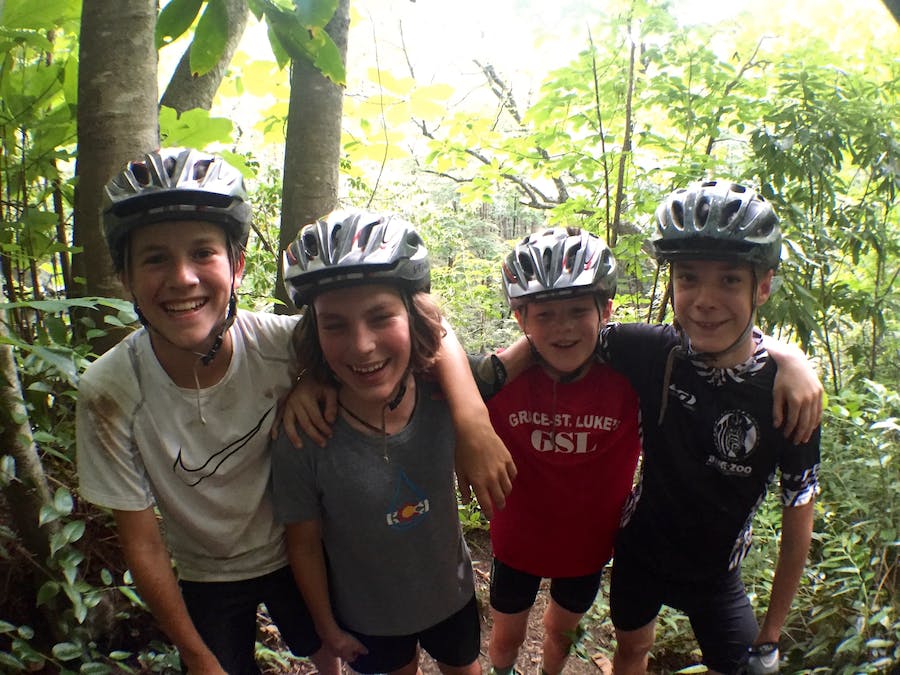 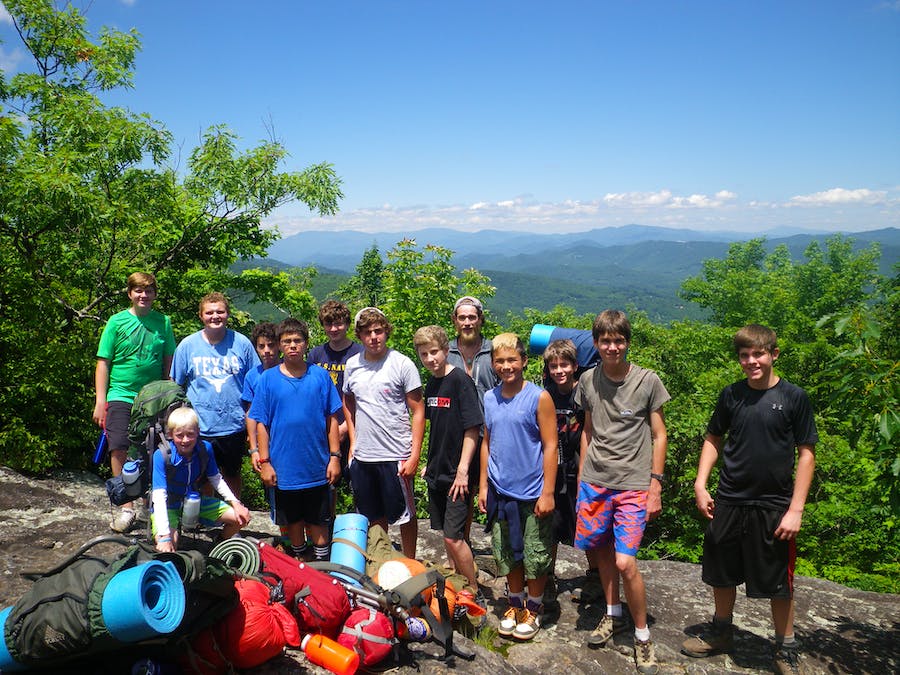 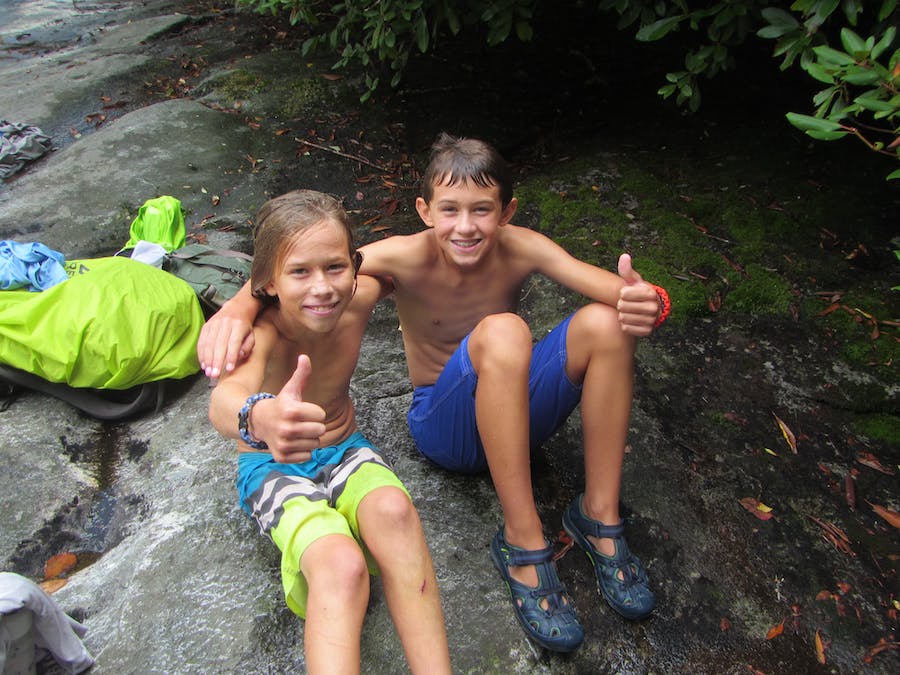 Back in the 1920’s, Mondamin’s horseback and hiking trips explored the mountain trails with only primitive gear and keen judgment. Paddlers explored rivers by wooden canoe. In 1933, a group of campers and staff trucked canoes just four miles from camp, across the eastern Continental Divide, to put in on Mud Creek in Hendersonville… and paddled to the French Broad, down that to the Tennessee, on that to the Ohio, and finally to the confluence of the Ohio with the Mississippi River at Cairo, Illinois. The trip took three weeks. A few years later, another group put in on the Green River, on our own side of the divide, and paddled to the Atlantic Ocean.

Frank Bell, Sr., who founded the camp, even has a rapid on the French Broad named after him, as a result of… well it’s a long story, but he was probably the first to run that particular section. In a wooden boat, of course.

This interactive trip map will let you discover some of our favorite places to explore in the western North Carolina mountains surrounding the camp.

During each camp session, we regularly run trips as a complement to our in-camp program. We go out by canoe, kayak, sailboat, horse, mountain bike, and of course on foot. Most trips go for one to five days; some are longer. There are trips for all skill levels in each activity. Campers must qualify for a trip – which means they must demonstrate the necessary skills during lessons here at camp. They then sign up for the trips that they wish to go on. New trips are announced almost every day. Age is not a requirement, though it may be a factor in selecting an appropriate trip.

A Trip Schedule From a Recent Summer

(In addition to all of the in-camp activities!)

A one-day intermediate level rock climbing trip went to Gilbert’s Rock; a six-day advanced level Linville Gorge hiking/climbing expedition left; a backpacking group went out with them, planning to spend five days hiking from Linville to Mt. Mitchell; a Down Green whitewater canoeing trip went out on a day trip; and a mountain biking trip left for a three day ride in Pisgah.

Today a rock climbing trip for younger campers went on a day trip; and a tubing trip went for an afternoon on the Green River. A one-day Nantahala canoeing trip left right after breakfast. A sailing group exchanged with a Green Cove group at Lake Fontana (near the Smokies), to stay out for four days. A “Mystery River Recon” (for advanced beginner paddlers) left later in the morning for a 3-day trip, destination unknown (to the campers, at least). A bus took a Mondamin climbing trip to Looking Glass. The Nature Lab took a field trip.

Mid-week, the Nature Lab took an outing for stream exploration; a group of beginning whitewater paddlers headed off for the lower Green River; an intermediate paddling group left for a three-day on the Toe River in Tennessee. A group who wanted to fish packed up for an overnight beside a nearby stream.

Today there was a climbing trip to Cedar Rock; a 3-day intermediate canoe trip departed for the Tuckaseegee; and another biking group exchanged with the one that left Monday. That day also, the Mystery River Recon canoeing trip was picked up. In the evening another Gilbert’s Rock climbing trip went out, and the nature trip returned.

Another Down Green canoeing trip left, and the Mt. Mitchell backpacking trip was picked up. The fishing trip came in, and a Green Cove group replaced Mondamin’s sailors at Fontana. The Looking Glass climbing trip was picked up (along with a Green Cove Smokies hiking trip). A group of horseback riders took the six horse trailer to DuPont State Forest for a day of trail riding.

Today was for picking up loose ends. A Gilbert’s Rock climbing trip went out for the day. The Toe River canoeing trip was picked up. The Tuckaseegee canoeing trip came in.

Location Camp is located on the banks of Lake Summit with over 800 acres of woodland forest in beautiful Western North Carolina. We think it's the perfect spot to play in the outdoors!